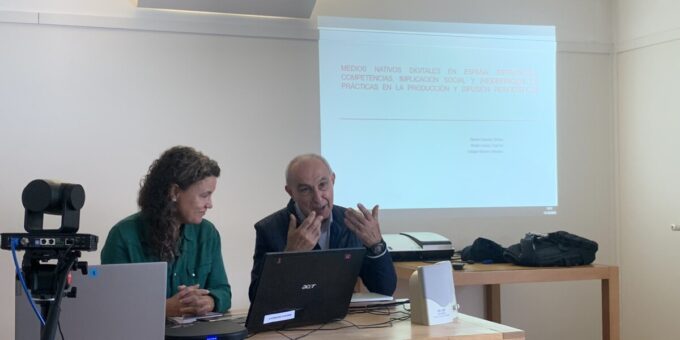 On 13-14 October 2022, the research group Novos Medios (New Media) at the University of Santiago de Compostela (USC) Faculty of Communications Sciences organized an academic workshop to present three major research projects. The workshop brought together a group of highly reputed academics from several universities in Spain.

Two of the projects are run by the USC. One of them, Diginativemedia is a research project focused on digital native media and their impact on journalistic practices. The project is led by professors Xosé López and Berta García Orosa (photo). The second one, a project named Valcomm, led by professors Miguel Túnez López and Francisco Campos Freire, aims to research the impact of the platform economy on public service media. The Media and Journalism Research Center is part of this project through its director Marius Dragomir who is planning to release a series of academic papers as part of the project. One of them will introduce a new framework for the study of public service media in the platformized media ecosystem. In other papers, Dragomir is going to apply the framework to a few case studies, which could include the United Kingdom, Finland, Romania and Latvia.

The third project presented at the Novos Medios workshop was Innovacom, a research project that aims to map actors and technologies involved in generating innovation in content production. The project is led by Juan Miguel Aguado Terrón and María del Mar Grandío Pérez from the Faculty of Communication and Documentation Sciences at the University of Murcia.